“The public authorities multiply the effects of droughts”

Julien Le Guet, boatman, accompanies those interested in exploring the biodiversity and history of the Marais poitevin. To protect it, he became spokesperson for Bassines non merci, a group of citizens opposed to the construction of mega-basins. In the immediate perimeter of the Marais poitevin, there would be about forty. These gigantic pools of water, made watertight by plastic sheeting, form artificial lakes that can extend over more than 15 hectares. The goal: to irrigate the crops of the agro-industry.

Reporterre — Why do mega-basins crystallize tensions around the scarcity of water resources ?

Julien Le Guet The promoters of these projects repeat tirelessly: “ In winter, water is abundant so let’s not let it go back to the sea, take it and store it until the dry season. » Why not ? We can hear this argument. Except that in reality, the water they want to seize is not that of the river or that of a flood. No, to fill these huge artificial craters, pumps fetch water from several kilometers deep in the water table.

This underground water is a reserve that belongs to everyone. Protected from the heat and already partially filtered by the limestone and the surface plant cover, it is less polluted than river water which suffers the brunt of nitrates, pesticides, etc. We should sanctify it ! It is supposed to supply us with drinking water, but also to supply rivers and marshes during the summer. Instead, it is captured, privatized and monopolized for the benefit of a few large farms using massive irrigation. Farms that make agro-industry, and not small vegetables going to feed neighboring markets.

Since the start of the year, France has recorded a rainfall deficit of 35 %. Under such circumstances, do mega ponds stop pumping water ?

No. Winter is the precious season in which groundwater recharges. Only, instead of leaving them alone, they are washed to fill the mega basins. And this, whatever the evolution during the winter ! It happened this year. From the end of December, the local prefectures of Charente-Maritime and Deux-Sèvres prohibited any filling of reservoirs and bodies of water, including for fish farmers. The instruction was very clear. Except that on closer inspection, a small paragraph in the prefectural decree underlined that the basin of Mauzé-sur-le-Mignon was subject to a derogation. 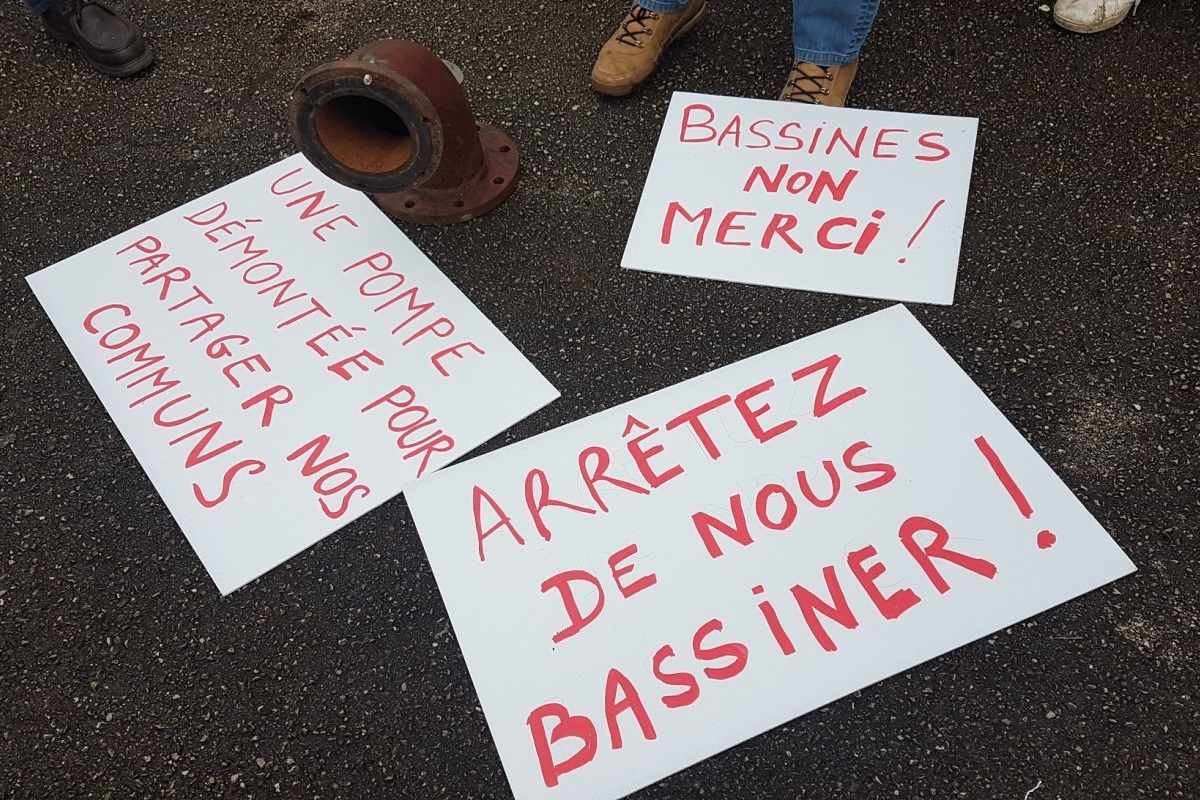 Placards in support of Nicolas Girod, of the Confédération paysanne. In February, he was summoned to the gendarmerie for his involvement in the November 2021 demonstration in Deux-Sèvres against the creation of sixteen mega-basins. Twitter / Claire Arnoux

Throughout the department, however, it was proven that the water tables were flattened due to the scarcity of rain. Next to the basin, the piezometer, that is to say a hole in the ground which makes it possible to observe the level of the water table, had reached a level not seen for twenty years. Despite all this, the prefecture and the state authorized the filling. It’s a real scam. Result: three months later, on March 15, the thresholds were so low that they had to stop pumping. The winter fillings of basins terribly aggravate drought situations. Today, the water table in question is less than 20 centimeters from the lowest historical level ever measured.

What are the consequences for surrounding farmers? ?

They are not the same for everyone. These basins are the source of great inequalities. From this week, farmers connected to it and having paid can use the water, even if there is a prefectural decree prohibiting all irrigation. On the other hand, those located too far from the basins and therefore not connected to the network cannot water their fields because the groundwater will have been prematurely pumped… by the mega basins. However, those who benefit from these very often have large farms, and the others very small market gardening farms. Irrigation is an accelerator of gigantism, and therefore of the concentration of wealth and land.

Let’s not forget the consequences on biodiversity. Around these species of bunkers filled with water has developed an agriculture that is anything but agro-ecological and diversified. It is almost exclusively corn, corn and more corn. This monoculture has a sterilizing effect on lowland fauna. A number of species recognized as being of European interest — such as the little bustard, the Montagu’s harrier or the stone curlew — need insects, earthworms or rodents. It is not in these fields of corn as far as the eye can see that they will find this food. Moreover, these birds cannot nest in these plots because they are watered with a water cannon. No nest would withstand the shock.

How do public authorities position themselves in this conflict? ?

The irrigators are our adversaries. The state, our enemy. Today, the Minister of Agriculture and Food, Julien Denormandie, and the national leaders of the FNSEA push the wheel very very hard. They no longer hide their objective: the first basins implanted are only a first attempt before a generalization of the device. Jean Castex also put a layer on the 1er February, announcing that he was going to put 100 million euros on the table to accelerate the projects [1]. This is also what gives us so much determination to fight locally. The government wishes to extend the powers of the prefects so as to speed up the procedures and be able to free itself from a whole host of legal frameworks in terms of impact studies and public consultation. Roughly speakingthey want to purge the heaviness of the democratic machine to grow basins in less than a year, where it takes three today. 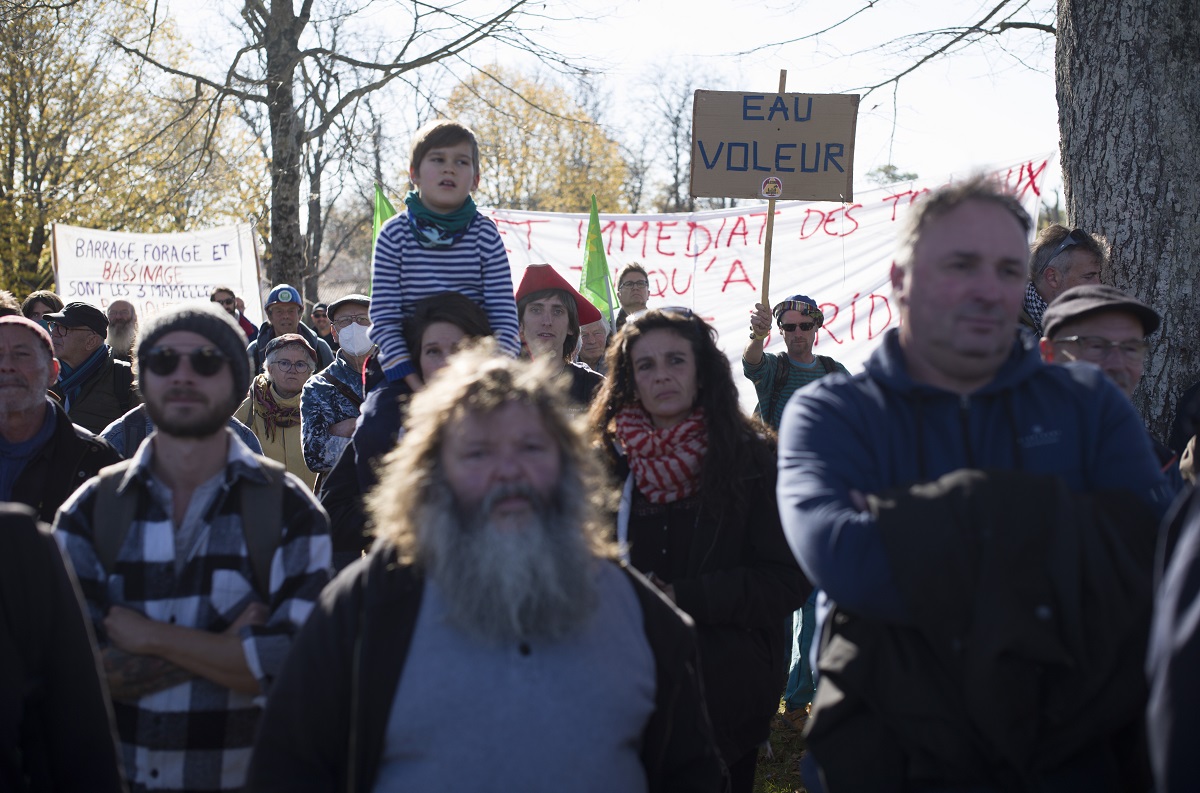 These expensive works are supported at more than 70 % by public money, namely the Water Agency, the Region, the State and Europe. Fortunately, the tide is starting to turn. With the Confédération paysanne, our collective alerted the European Commission. We were interviewed by forty MEPs last year and told them that in our country, six European directives were potentially flouted. Our signal was taken very seriously since it was the subject of a letter from the Commission to the French State asking it to provide all the elements. The arm wrestling is therefore engaged, although besides that, European funds have already had to be spent to build these basins.

They therefore finance developments that will aggravate episodes of drought…

Exactly. The public authorities, by participating in this financing, multiply the impacts of the droughts against which they themselves will have to fight. In the same way, they support projects that go hand in hand with agrochemicals and which, at the end of the chain, give huge costs to make the fleet that comes out of the tap drinkable again. We are offended by this state policy. We are scandalized by the lack of mobilization of local elected officials. We are really in the front row to witness the great collusion that exists between the FNSEA [Fédération nationale des syndicats d’exploitants agricoles] and scales of power, from local to European. Every day, we witness numerous flouting of the protection of nature and laws. It is in this anger that we find new modes of action that readily fall into the category of civil disobedience.

“ Everyone hates bedpans “: in Deux-Sèvres, a big demonstration to protect water

[1] During the conclusions of the Varenne agricole de l’eau, at the beginning of February, the Prime Minister, Jean Castex, announced a series of measures to facilitate the creation of reservoirs as well as an envelope of 100 million euros.